What Are MMA Gloves ? 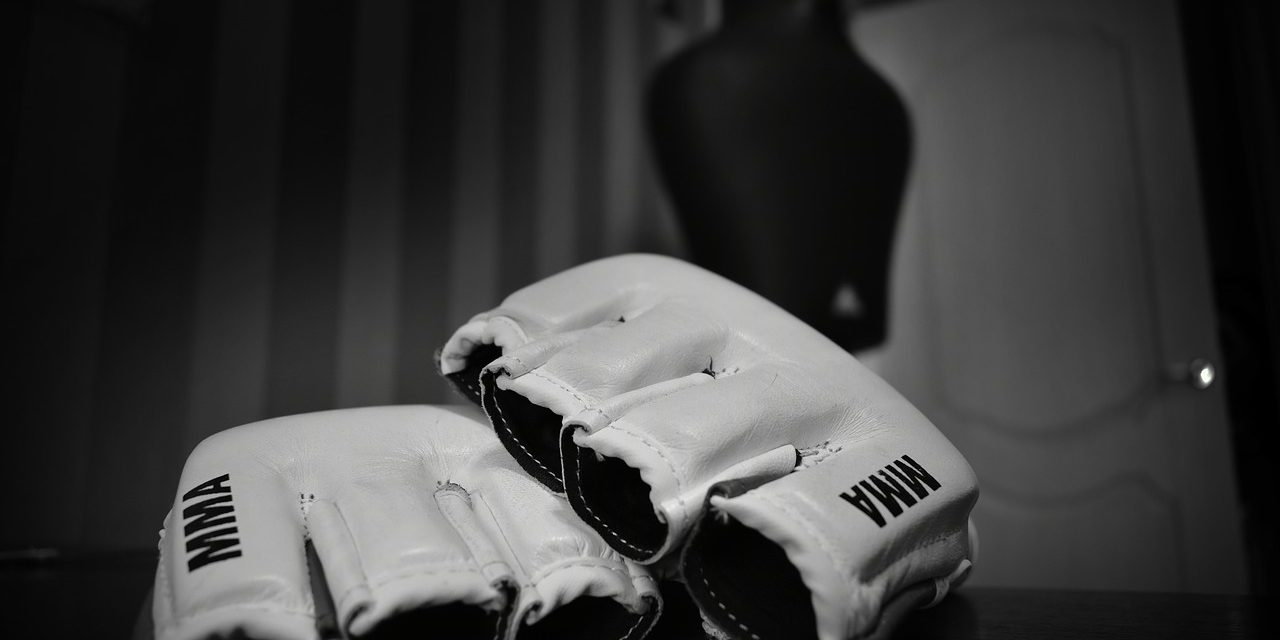 MMA gloves for competition are 4 ounces and they have an opening for the fingers and thumbs so that you can grab. Everyone knows what boxing gloves are and that they protect your hands when you’re punching bags or people in sparring.

MMA gloves are a hybrid of boxing gloves that are much smaller so that people can grab their opponents. The rules in MMA are different than boxing. In boxing you can only punch above the waist and when someone hits the ground the fight is paused until they get back up.

In mixed martial arts, they allow punching, kicking, and you can go to the ground. In order to be able to wrestle or grapple you need to have your fingers and thumbs open to grab. Instead of just being bare knuckled, they made a glove with some padding to protect the hands, knuckles and wrists.

When mixed martials arts started and was popular in Japan, there were no gloves. Even in the early days of the UFC which was known better by the Ultimate Fighting Championship, they didn’t wear gloves.

Trevor Wittman is the striking coach for Justin Gaethje who will be fighting Khabib Nurmagamedov later this month for the UFC Lightweight Championship. Khabib is the undisputed champion and Justin is the interim champion as Khabib wasn’t able to defend his belt because of the fallout of the cursed fight between him and Tony Ferguson.

Wittman is one of the best striking minds in MMA and on the Joe Rogan Podcast he showed off his gloves and explained why they are the best. It was clear that this was a true innovation and made by someone who understands MMA striking probably better than anyone.

They’ve just released and he doesn’t have as much manufacturing capability as these bigger companies so these are very limited.

On the podcast, Joe Rogan asked Wittman why he hasn’t taken his gloves the UFC. Wittman explained that he had met with Dana White, the president of the UFC, and Dana wants them but they are currently under contract with a manufacturer.

The manufacturer would want ownership stake in ONX Sports and Wittman isn’t giving that up. So hopefully, the contract with the UFC will expire and the UFC can use the best gloves for the best fighting competition there is. That only makes sense right?

Well, not necessarily. The gloves the UFC currently uses aren’t nearly as good as any of the gloves people use in training that you can buy from any of these companies like Venum, which actually signed a new deal with the UFC to replace Reebok as the UFC’s official apparel sponsor.

The UFC gloves take effort in order to make a fist. If you relax your hand the glove is going to open. That’s what leads to so many eye pokes in the UFC according to Justin Gaethje. Also, the fighting positions are all with closed fists so it doesn’t make sense that they should have to actually use their strength and effort just to make a fist and then punch.

They’re using up more energy than they need to. If the fighters in the UFC used ONX gloves they wouldn’t have to use their forearms and gas them out in order to punch and block punches.

ONX is really impressive. Not only do they make the best MMA gloves but they also make other functional training gear for MMA. Justin is Trevor’s test dummy and throughout the years they’ve perfected the gear they need for training.

Trevor made pads that are better to hold onto because the pads out there now are hard to hold while a UFC Champion is training for the biggest fight of their life. The years of holding pads have also curved Trevor’s hands so he even customized the curves so it’s more natural for actually holding mitts.

ONX also made headgear that’s better protection for the head and shin guards. It’ll only be a matter of time before his company is fully integrated and he makes all MMA training equipment.

All Gloves Are Not Made Equal

While competition gloves for mixed martial arts are 4 ounces, the fighters use different types of gloves when training. When sparring, they use 7 oz gloves because they have more padding and protect their hands better. When they’re really focused on just striking, they often use boxing gloves because they offer more support and allow you to punch harder and more times.

Boxing, Kickboxing, and Muay Thai all use a similar glove. They are usually between 8-14 ounces depending on the size of the person. MMA gloves come in different sizes for the hands but maintain the same weight of the glove so they can be regulated for competition.

If you’re a beginner in martial arts, then a regular pair of boxing gloves works great. You can train striking separately from grappling style training. When you’re doing Brazilian Jiu Jitsu you don’t need gloves. The same goes for wrestling.

If you’re cross training which is what many fighters do, then you’ll want a pair of open finger gloves so that you can do all martial arts training and also lift weights and do all kinds of circuit type workouts.

If you’re wearing the gloves with open fingers then you can train everything in one shot, simulating a round in the cage. Rounds in MMA are 5 minutes and to simulate that when you don’t have a training partner you can hit a heavy bag and work on your striking and then maybe jump rope.

You can use the Air Assault Bike while wearing your gloves, get your heart rate to a certain level and maintain that high intensity and then work on your striking to practice striking in a real fight when you’re tired from striking and/or grappling.

The last thing we’ll leave you with is just that self-defense is a good thing to know. Of course it will give you the ability to defend yourself but it’s also great exercise and can improve your overall confidence.

How running can improve your sleep quality

The Rise of Bitcoin in Sport Betting

Everything You Need To Know About Pilates Socks